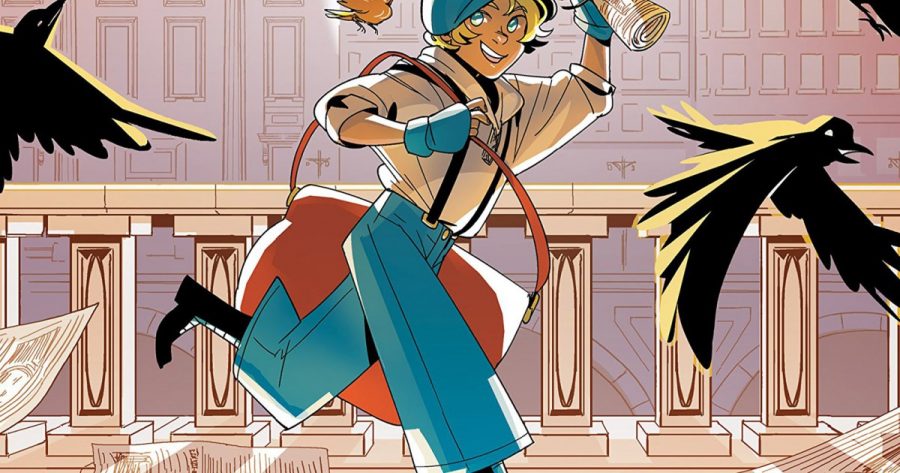 This week we’re going to explore a sweet comic by Ru Xu called NewsPrints. I found it diving into the shelves of the local comic book store. It tells the story of Blue. She’s an orphan who works as a newsboy. To do that she has to disguise herself as a guy. Since the comic book happens during the war time, it’s not surprising to see men and women doing different roles. Blue is a girl, so she should be selling cookies. However, she loves living and working at the Bugle, the only newspaper that does deliver the truth in town.

So, Blue’s job is crucial: she delivers a right paper that explains the truth to their readers. But, everything seems fine as long as she is a boy. But, what would happen if she were to tell the others that she’s a girl?

Then she meets Crow, a boy who also has secrets. They both have a quest for freedom. They become best friends in no time. Blue is super tired on a day and falls asleep while working. Crow helps her and brings her back to the Bugle. There, Hector, one of the grownups, teases her: “I’d bet your secret that he is the Jack I’m looking for.”

Hector knows she is a girl and wants her to help him find Jack. And he uses her secret to making her help him because they’re at war.

It turns out that Crow is a machine, a robot. But he is not a weapon. He’s only a kid, very much like Blue. So, she tries to help him. And in helping him, she gets courage enough to tell her secret to everyone. But it comes with a little price.

The artwork of this comic book is fresh and sweet. The story is surprising and touching. It’s the little secrets that are owned and revealed when we want that make us human.

This is a beautiful comic book that will get you question stereotypes and society roles. It also tells us about friendship. We can find it in the most unexpected ways. This is a great comic book. Don’t miss NewsPrints!

I loved Blue and Crow. And I also liked that sometimes grownups make things too difficult. We could start being more relaxed. The world would thank us all.