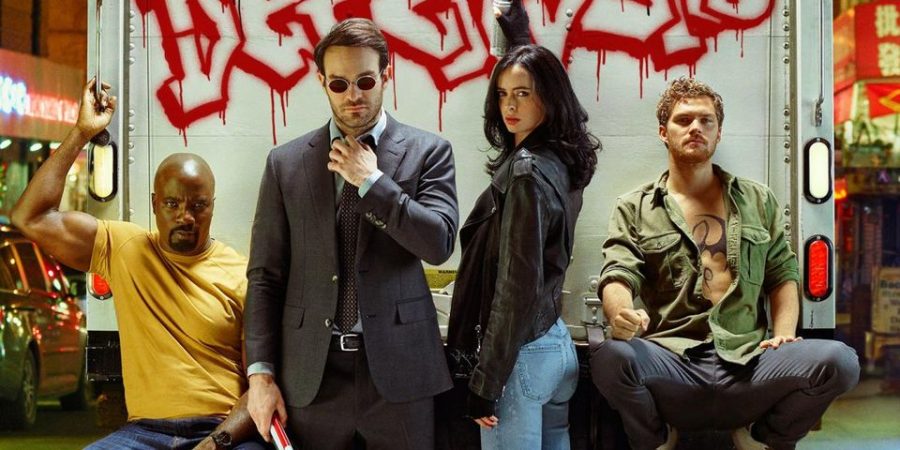 Have you seen the Defenders trailer yet!? Netflix’ Marvel’s new hit trailer has just hit the web, and it’s amazing. As I suspected, Iron Fist will be the kid in the group. But, how these damaged Superheroes can save the day? Will they kill each other first? Who are the Defenders anyway?

Netflix gave us Daredevil first. It has two seasons and a third one on the way. Charlie Cox is Daredevil, a troubled lawyer that kicks ass at night. He is blind, and yet he sees more than others do. However, he’s not perfect, and so he creates a lot of mistakes.

Then we have Jessica Jones. Netflix has given us a season of greatness. She is damaged and drinks too much. But she’s brilliant and very dangerous. She kicks ass and has no problem with being ruthless.

Then we have Luke Cage. This might be one of the greatest Marvel shows on Netflix so far. He is sweet, and yet he is a rock. If you haven’t seen it yet, you should head to Netflix to discover all the goodness Luke Cage can provide to you!

And, finally, we get Iron Fist, the new kid in the group. He is an outsider, wherever he goes. And so is the show. With lots of critics, it seems that it has felt short. However, I see him more like an expat who is having trouble adjusting to living back home. If you’ve been living eight years in Japan, like I did, and then came back home, you know what I’m talking about.

So, what can we expect from them? I expect tons of action and drama. These four Superheroes couldn’t be more different. Not only they represent diverse backgrounds, but their experiences are also at odds with each other. Gender, race, and age are just part of the tip of the iceberg.

I can’t wait to finally find the series on Netflix and binge it all in record time! I bet it’s going to be the best of the shows we’ve seen so far. And yes, it’s going to be difficult to be better than Jessica Jones and Luke Cage. But I expect nothing less.

Now, I wonder: will we see any glimpse of Alien somewhere? Maybe a poster on a wall somewhere? You know what I’m talking about. I’ll be alert just in case!

The Dark Tower and For a Few Dollars More Stricking Connection