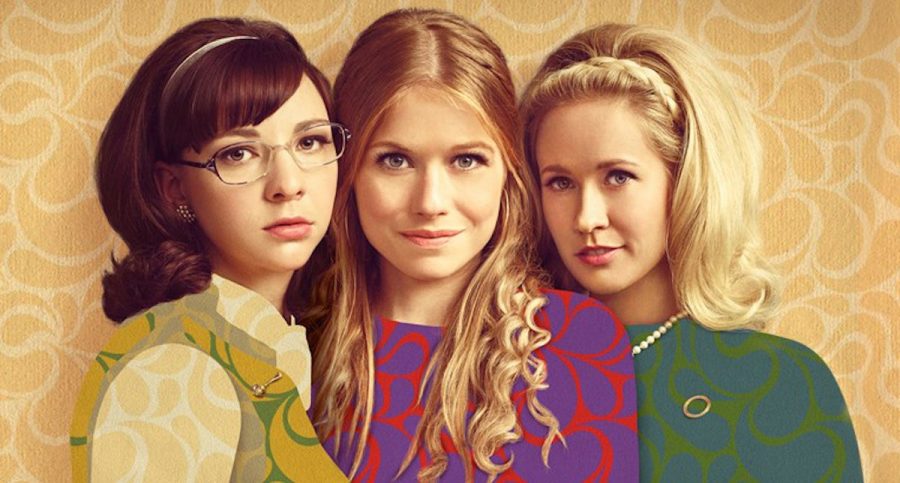 Good Girls Revolt is a jewel that you can find on Amazon Prime. It might sound like the topic is dead, but it couldn’t hotter. The show has been canceled, and it seems there won’t be any second season. Is it because we’re going back in time to when women and men hadn’t the same rights? If so, we might well take our shiny armors again!

Based on real facts, this show tells us the story of a group of women and their fact for equal rights in the workplace. A group of women from Newsweek filed a complaint back in 1970 and hell broke lose. After them, many others followed.

It was a time when some women didn’t dare to look at their vulvas with a mirror. But it was also the time for the second wave of feminism. The counterculture was all over, and times were changing. And while Newsweek was covering everything, they were also discriminating their female staff. None of the women were allowed to become writers (or editors). They even hired a freelancer female writer to cover the women revolution for one of their issues. When that issue hit the stands, women working in Newsweek hold a conference and revolted.

Good Girls Revolt follows the life of very different women working for News of the Week, a cool magazine that aims to get bigger. Only men are writers. Women are just researchers. We have a hippie, an adorable middle-class girl, and a rich girl who makes everything perfectly. We find other badass characters that kick ass, like Eleanor Holmes Norton, the lawyer from ACLU that convinced the girls to revolt.

Patti, the hippie girl, wants to write. One day, a newcomer working mate revolts. She re-writes a perfect piece. But when the boss realizes that it was written by a woman, he ends up rejecting it! This is shocking for her, but also to her other female co-workers.

Later on, she attends a feminist party along with Cindy. Cindy is a sweet girl married with her first love. She has no clue whatsoever about feminism, the female body or female pleasures. Thanks to Patti, she embarks herself on a path of self-discovery. But thanks to Eleanor, she also finds a way to empower herself discovering that women also have a voice.

It is in this party that Patti starts thinking about revolting. It won’t be until much later when Patti and Cindy start recruiting female workmates to have enough numbers as to fill in an official complaint.

Patti has a boyfriend, Doug. He is a writer in News of the Week. She is the one giving him facts and also writing for him at times. This couple has a hard time together: he is unable to see her side at first. He isn’t a bad guy, but he has trouble because he is the privileged one. Doug has an interesting path in the show. He starts being a little bit of a “dick, ” but he grows little by little. I wouldn’t call him a feminist, but he is someone who can open his mind with some more experience about the world.

Then, there’s Jane. She’s blonde and perfect. She works in News of the Week and likes the writer she’s helping. But, she’s also in love with the guy she’s supposed to marry. After two years together, she gives him an “ultimatum.” But he breaks with her. This makes her go from someone along with the system to opening her eyes. Is she nothing more but a future housewife? Can she do more?

Jane has an incredible evolution during the show. She is so perfect at the beginning that it hurts. However, when she starts feeling sexism on her own skin, she realizes that all women are sufferers, not someone else. She is a victim too. And, even if she joins late, she does it in full force.

Cindy is too sweet and naive. I’d say that she’s the unicorn of them all. She’s cute and knows nothing about being a woman. However, her discovery and empowerment path make of her a hero. She needs to save herself from the trap she lives in, and she learns to do it by herself, not with any guy. She’s adorable, and yet you can feel her pain and why she ends up drinking a little bit far too much.

She represents many women who were good and were trying to do their best. She was very forgiving too. Her husband punched a whole in their contraception so that she would get pregnant. And that without her consent! (I won’t spoil her path too much so you can enjoy the show.)

Many comments towards women will hurt you a lot. You will probably roll your eyes, make noises or even cry out loud “come on!” Then you might feel comfort because we’re not in the 70s. However, remember that this show got canceled! It looks like it hasn’t clicked with the audience. However, there’s still time to take a look and revolt.

True, we’re not in the same era. Sadly, many situations portrayed in the show are happening nowadays. So, should we stay with our arms closed and enjoy the show as a rarity? We can’t. Many rights that these women got for us are being challenged at the moment. (Think about the right to control what’s up with your body.)

This show is good because it shows you how different women, who are doing their lives, join forces to fight a system that puts them in a second unfair place. To give the same opportunities is paramount, but it’s also crucial to treat everyone as human beings.

You can find many different topics in this show related to feminism and sexism. Since the show has been cancelled, we have no way to follow the stories of this women. However, we can have access to the real stories in written form. Yes, there’s a book: The Good Girls Revolt

[The Book Depository]. So, yes, I decided to buy the book because I want to know what happened to them!

If you decide to watch the show, let me know what you think about it. Here you have the trailer:

Thor: Ragnarok. What's up with Mjolnir!?

Disney's Beauty and the Beast is Beautiful