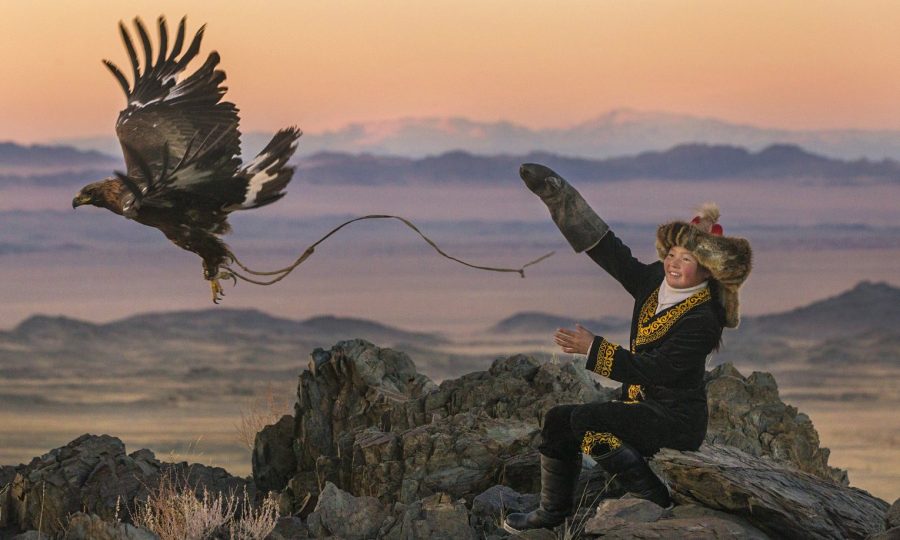 Yesterday I saw the Eagle Huntress in the cinema. The Eagle Huntress is a documentary about the quest of Aisholpan, a 13-year-old Kazakh girl from Mongolia who dreams of becoming an Eagle Hunter in her country. She lives with her nomadic family, goes to school and helps her family. Her mentor is her father, who believes all kids are equal. In fact, her quest is a memorable one taking into account that Eagle Hunting is mainly a male activity. She comes from a family with several generations of Eagle Hunters.

Her family could have quickly stopped her from such a dangerous endeavor. However, her father is determined to teach her if that’s what she wants. And her mother is willing to have a happy kid. If she intends to be an Eagle Huntress, so be it. This way of doing things shocks with the way of thinking of most elders: women are weaker, don’t know how to hunt, etc.

We can see Aisholpan working for her dreams come true, regardless of what others think. Her father is her hero and the one who teaches her everything. Imagine his father’s face when she won the Gold in the National Eagle Hunters competition! A proud father saw how his 13-year-old girl had beaten everyone else.

There are scenes in this movie that make you feel the chills. Especially when Aisholpan is set up to catch an eaglet to train it. It isn’t an easy thing to do. Also, wondering around the endless ice is harsh and forbidding. And yet, there she goes along with her father.

This documentary is staggering. You’ll leave the cinema uplifted. Despite some forced guidance by the director, I must say that this is a must-watch for everyone. We are to fast as to complain about the little things, and stop ourselves from our dreams just because others are against it.

Aisholpan is a real hero. And she is so because she just wanted to be and Eagle Huntress. And her father is an amazing man who did listen to his daughter and helped in achieving her goals.

If you have the opportunity to watch this documentary, do it! You won’t regret it!

What I’m Watching: the OA, from Netflix

Harry Potter and the Philosopher's Stone