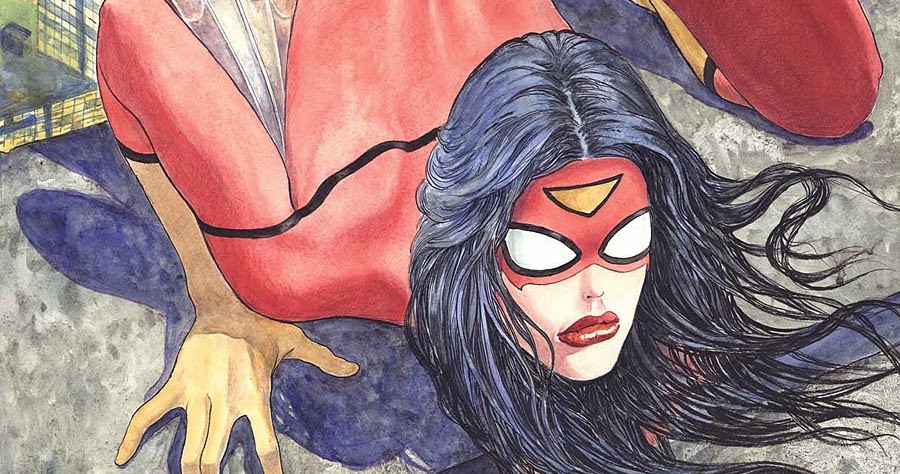 Do you remember Milo Manara’s Spider-Woman variant cover for Marvel and all the fuss that it created? Well, Manara has made it again. And he has managed to make it even worse. How? Making her perfectly naked!

Milo Manara and Frank Cho hosted a panel in Lucca Comics and Games 2016, in Italy. The panel was titled “Frank Cho, Milo Manara and Women – A dialogue between two Masters.” Here, Manara presented a Spider-Woman illustration to Cho as a present at the end of the panel. Now, the problem is the picture if you put it in the wrong genre, and the attitude of both artists regarding the illustration and what it represents.

The illustration of Spider-Woman that Manara gave to Cho as a gift depicts a very naked Spider-Woman with all her labia on the loose. According to Cho’s Facebook, this gift was “in appreciation for fighting censorship.”

(Let me clear my throat).

Think about it: would you consider this illustration of Spider-Woman okay for a comic book cover aimed to almost all audiences?

We’re confronted with the same problems yet again: the outfit is just painted on her skin, and whatever might be left as cloth might be the boots. The illustration clearly depicts her in a very objectifying manner: as a sexual object, not as a great Superhero. The message here is clear: women, even if all powerful, only exist to give sexual pleasure to men.

There is no surprise then to find out that these two artists are finding tons of backlash against their artwork in particular contexts. The problem is not that they depict women in certain poses, it is the genre they’re depicting them into.

These two petulant artists want to depict women in just one way: as sex objects. And they want to get their way in a medium that has many different genres. Superhero comics are read by all sorts of public, including children. Right, Manara was given a variant cover to play with. But, guess what, kids also get to see those variant covers in the comic book store!

The problem here is that they want to impose a limited vision of female representation in all kinds of comics. In this case, Superhero comics. Are women only valuable for their sexual attributes? Are you telling me that you see women only as sex toys? If so, what you’re telling me is that your free speech is nothing but imposing your views on women. The rest of the world, then, is just mistaken.

They also argue that they feel oppressed because of all the backlash they’re getting. Oppression is a very different thing. You’re oppressed when governments stop you from exercising your rights or arrest you because of who you are or the ideas you have. Oppression isn’t happening in this case. People are just stating the obvious: these are diminishing images for women if you want to impose them everywhere!

People complain about those Spider-Woman illustrations because they’re sexist and out of context. Drawing female Superheroes in this way is extremely harmful, not only because it’s sexist, but also because it is sending the wrong message to readers. While comics have been the arena for straight cis men for a very long time, we cannot deny that times have changed and the readers demand something else.

Female representation on media is a very delicate thing. If we only represent women in one of their aspects, we’re dehumanizing them. In representing them for the male gaze, and only as sex objects, we’re transforming women into sex toys that will do whatever men want from them. At least, this is the fantasy that Manara and Cho might have in their minds.

Women must be depicted in different fashions, just like men are. We must represent humans in all their possibilities. We cannot condemn one gender just to be a sex toy, or a race just to be criminals.

Sorry Manara and Cho, but, if you don’t change your attitudes, you’re going to be left alone. Not because of your art, but because of being unable to see in front of your noses!

Mockingbird, Chelsea Cain and "Ask Me About My Feminist Agenda" tees