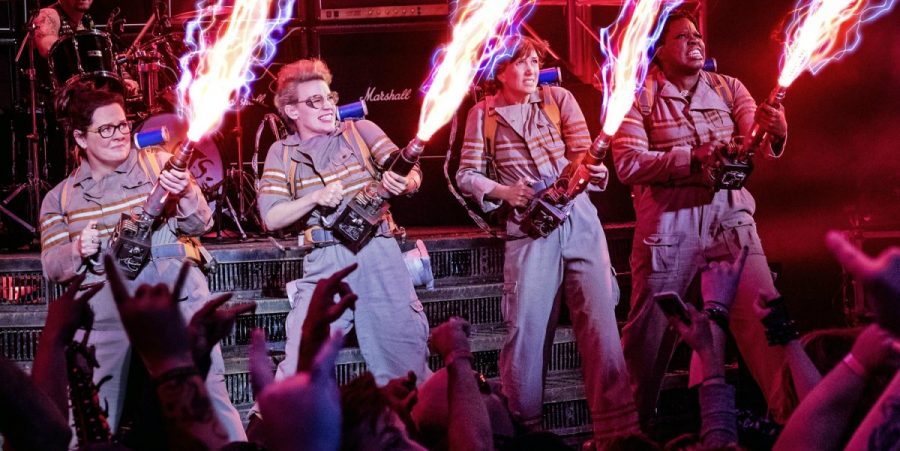 Yesterday was a big day! I went to the Geek Girl Brunch Brighton Ghostbusters edition, and it was a blast! We met to eat in a haunted restaurant in Brighton, but the big thing was the movie. Don’t listen to the haters: the movie is a masterpiece. It honors the previous films; it swaps genders without being a feminist claim, and it’s super funny. So, before I review the movie itself, let me tell you how was the brunch. We met quite late, around 3 pm at a Mexican restaurant called El Mexicano, where there has been ghost-seeing. Nope, we didn’t see any ghost, but we had a lovely time eating and playing games. We gave away Ghostbusters Funko Pops, and we got ready for the huge thing: the film.

The food was lovely. Ghost hunting was impossible since the ghost of the restaurant didn’t show up, but the whole brunch was a blast. We played games with Tarot and Ghostbuster cards, and we arrived just on time to the cinema!

[SPOILER ALERT: you’ll find spoilers for the movie from now on. If you keep reading you’ll be spoiled!]

I am a huge Ghostbusters fan. I love the original movies, and I must admit that I was wary of the reboot. However, from the trailers, I saw that it was something more than a reboot. All the hate online and all the problems the movie had seemed to pinpoint to the fact that the Ghostbusters are women. I wanted it to be just a movie where women do their thing being women, without being a feminist claim. I feared that. And you know what? The movie got the right balance! Genders were swapped without much ado, old stereotypes were shattered and made fun of, and we had an excellent array of characters to laugh from. Let’s be honest: the movie makes fun of male and female characters in the same way, and just shows up women doing stuff they like, being just women.

Kevin, the secretary, makes fun of the “dumb blonde girl” stereotype in a cool way. Maybe the stereotype is old, and some people might consider it dead, but how it’s shown in the movie is brilliant. The scene of Kevin and the glasses is just too funny. The reason why he wears specs without the glass is hilarious. In fact, how Hemsworth plays him is incredibly good. You can feel he had so much fun playing the role.

Yes, Kevin is the dumb blond secretary guy who takes weird pictures of himself, and who is… well… dumb. But at the same time he is adorable and someone you want to have around. Plus, he ends up possessed by the spirit of a troll guy who has a very shitty personality. The villain in this movie is no other than a troll! Yes, trolls of the internet, you can be yourselves reflected in that one.

The whole cast is great, and the cameos of the original movies in the film are marvelously done. The new Ghostbusters has honored the original films in an elegant, funny and compelling way. The original cast has given thumbs up to the new one in a witty and crafty way. Harold Ramis was in the movie as well, in fact, he was the first one to appear as a nostalgic cameo. (I won’t spoil this for you, just be alert at the beginning of the movie when they’re in the University.)

The story doesn’t clash nor diminish previous movies either. In fact, it mingles perfectly. As the story unfolds, and the cameos come out, you’re not only enjoying the new narrative, but you also remember the previous movies!

And then, there’s Jillian Holtzmann. She was the Queen of the film! This “pantastic” character stole the show: she’s deadly funny, witty, sexy, geeky, quirky and has the best glasses ever. (I want those glasses, and I want to cosplay her!) I’m so glad I got her Pop before time since she is perfect!

Don’t get me wrong: all the characters made me laugh out loud. However, Jillian is the one that tunes the most with me. She was so quirky, funny and crazy that I adored her from the very start. Plus: she is fearless. And, she flirts with absolutely everyone! She flirts with Erin Gilbert, but also with Kevin, and well… she is a flirting machine! I’d love more LGBT+ flavors with her character, but I already love her as she is at the moment. Kate McKinnon did a fantastic job!

And now, the PIECE OF ADVICE: stay in your seat till the end credits. After all the music and all there’s an extra scene. I have the custom of staying until the end since Marvel spoiled me that way. And this time, it paid off! In this extra scene, there’s a hint for a second movie! So, stay calm, enjoy the music, the end credits, the funny images that are popping around, Kevin dancing, and wait for the extra scene!

Don’t listen to the haters: just go to the cinema, watch the movie, and get your own opinion about it. All those haters that are out there arguing that the film is not honoring the original ones didn’t watch the movie or hate the idea of having a female team leading the reboot.

Now I need the new Lego Ghostbusters Ecto-1 set. I have the original cast, but now I want the new too! I need them all! Because: they all rock!

Final note: if you’re in the UK, please call the Ghostbusters. Kevin has left a funny message for you! [Brilliant marketing campaign!]

Comics THORsday: Doctor Strange, the Way of the Weird