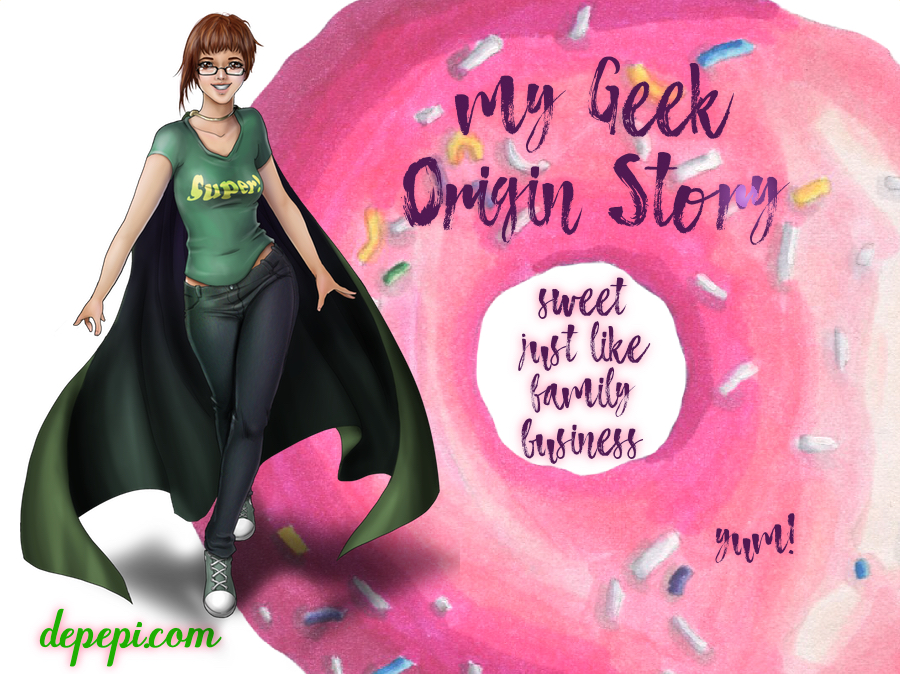 My Geek (Superhero) origin story is sweet, just like family business. When your parents have a restaurant and have been working making people’s bellies full and happy, people think that you will continue with the family business. However, it’s not the cooking but the geekiness that passed along generations. I might as well cook super yummy cakes, but what my Mom gave to me were sheer amounts of geekiness. As a kid, I was adorable. As a teenager, a nerd obsessed with Japan. As an adult, I’m Super, sweet and with funky hair colors. How did I make it this way?

I could blame it on my Mom easily, but I think that you just join the club if you really love it. I can’t remember exactly when or how old I was when my Mom introduced me to the Geek world. However, I do remember sharing Star Trek TNG with her, since I was older. Star Trek and Sherlock Holmes were shows that we would enjoy together. To the list, add old shows like The Twilight Zone, and new ones like the X-Files.

I was adorkably cute: long braids that arrived till my butt, tiny nose, and glasses (though I don’t wear them in this picture). As a kid of the 1980s and 1990s, I enjoyed movies like War Games, The Ghostbusters or Alien. I happened to enjoy Mario and read tons of books and comics. However, not the comics that I’m used to reading now. The distribution system in Spain was crap, and most American Comics wouldn’t arrive at the local bookstore. The only series I could follow were manga. So, I have the first editions of Dragon Ball and Dr. Slump in Catalan language. However, I could find a place where I could read the X-men: the Dentist. From where they got the issues, it’s still a mystery to me, but that was the only place I could enjoy Storm and Wolverine!

Because I was the only geek in the school, I was an easy target for the bullies. My memories from school are pretty grim. They would tease me for no reason and call me names, and even push me from stairs to break me. However, there was a realm that helped me survive school: manga. I was obsessed with it, not with the translations that I would find in the shops, but the one that I got in Japanese from a pen friend from Tokyo. The school had a program to learn English so that we could choose someone around the world. We had to write a list of countries so that we could have a perfect match. I wrote a list repeating the same country countless times: Japan. Remember: this is pre-Internet, so it means that we exchanged mail by post. It means that you need to wait weeks before you get an answer.

My pen friend, Yuko, sent me as present a Japanese-English dictionary. With that she opened Pandora’s box: I started learning Japanese, through English using that dictionary trying to translate manga and any other Japanese text that would end up in my hands. Thanks to this activity, years later I would skip one course at University since I already knew all the contents. (I also could read some Kanji I shouldn’t know due to that fact. Plus, my Japanese was a little bit odd since the source material was manga).

By the time I had the dictionary, and I was exchanging mail with Yuko, I started to say that I was going to Japan at home. I didn’t know the day, I didn’t know how, but I promised everyone that I would do it. And I repeated that eternally, all through high school, till I finally got a scholarship once I finished University. No one but my Mom believed in me that I would do it some day. Others would dismiss my words as a kid’s obsession that would pass soon. I made it at age 24, and I lived in Tokyo for eight years. In fact, I met with Yuko several times too.

My access to American comics was lame, to be honest. Distribution sucked during years due to the few numbers of local comic book stores. I lived in a tiny town as a kid, and they only had a bookstore. They would bring graphic novels mainly, and so I would have more access to manga than to Superheroes. The only place that had the issues I wanted was the dang dentist, who had his office in another town. By the time I was in high school, I had moved to a bigger city, next to Barcelona. I had more access to comics, but distribution was still a mess, and it was normal to miss issues.

Having more access to the Internet, earning money from my work and going to Japan were the factors that allowed me to enjoy the type of books and comics that I like. Some people say that we can enjoy geek stuff better as kids, but I disagree. As a working adult with a salary, I can tell you that it’s now that I can enjoy the geeky things that I like: from comics to collecting figurines, to enjoying shows that I love.

I was one of those kids who recorded tapes with the movies she loved on the TV. I also had the guts to start my own Fanzine and had a mailing list with other kids who wanted to read what I translated. Yes! A mailing list at that time meant that you would have people sending you money, and then you would send them the Fanzine by post! Since I was a member of the high school magazine, creating a Fanzine was easy for me. Besides, this was an excellent way to share my findings with other geeks like me!

When internet came, things changed all of a sudden. What it meant for me was instant access to information that was hard to find. Can you imagine yourself copying a comic or a book from a friend because you cannot buy it? Or recording a tape with music your friend bought somewhere else and that you cannot even find around? I’m sure you aren’t aware of the amount of tapes, floppy disks, mini-disks, copies and other techie stuff that I collected trying to gather the information on the topics that I loved… The Internet changed the game regarding access, and thanks to that I could read what I wanted at last!

I can firmly say that my geeky origins rely on my Mother and Japan. My Mom introduced me to a world of fantasy that allowed me to explore myself and make my creativity bloom. Japan, on the other hand, opened the door for me to explore the world out there. Not in my imagination, but stepping out the door with a suitcase and venturing myself to the unknown. Books, comics and fandoms opened the key for me to meet new people online and offline.

Moreover, I consider myself as super lucky since I was able to enjoy technology changes. This might sound stupid, but when I look backward, and I remember myself with a pencil and a tape trying to salvage it, I feel good. I also love the fact that I created a Fanzine during high school and that it allowed me to enjoy that part of the game. Yes, I was a pain in the ass in many ways, always talking about the day I would take a plane to Japan. Yes, I was adorable translating stuff for my friends, and yes, I love the Internet to the bone.

Some people believe that origin stories must be sad because those make the greatest Superheroes. Origin stories don’t need to be sad, but compelling. What made a geek out of you can be a parent, or a show, or learning a language, or a pen friend, or the technology of the time, or a combination of those. Yes, there can be sad moments like being bullied. But, many happy times in the path that made me the Super Geek Girl that I am now are treasures that I will keep forever in my heart.

What I'm Watching: Darkness and Superheroes