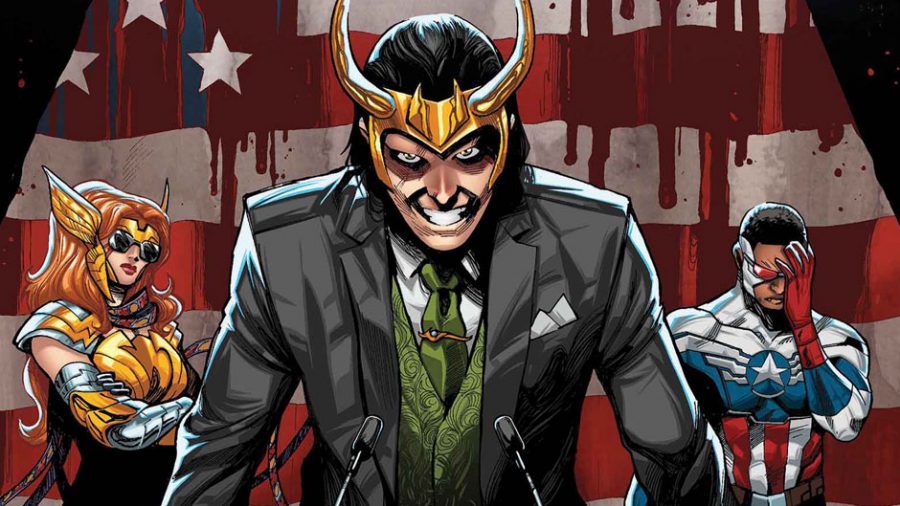 LOKIsday gets wild with VOTE LOKI #1! As you know, Marvel Comics has released a new title with Loki as the main character. Loki wants to become the next President of the United States, but how can it play out? As you know, the US is facing a new election with Trump and Hillary Clinton fighting to be the winners. However, it feels like the Americans will end up voting the lesser of both evils. Loki, the Trickster God, decides to enter into politics and mimics the political environment that the US is living right now. However, we cannot say that he’s been portrayed as a type of Trump in the comics. Since Loki can shape shift and also be a woman, it does feel like a mix of both candidates in real life. So, how does this comic mirror what’s going on in the US?

Vote Loki #1 starts by portraying politics as a trickster species of their own. As soon as the candidate wins, all the promises made during the campaign, are soon forgotten. Does it seem so terrible, then, when Loki appears out of the blue and saves the day from a sudden attack of Hydra to one of the candidates?

Loki appears as the savior, and just after the incident, he decides to save the whole nation by trying to become the next president. So, what’s the problem? Loki hasn’t been that good. As we can all remember, he tried to invade Earth and become a mad ruler. So, how is he going to convince the public that he has changed? How is he going to be a good guy now? As it turns out, with the help of the press.

Loki tricks Nisa Contreras, a famous reporter, into writing an article about him. She doesn’t write anything good about him, but the piece is printed with a catchy title: “Loki’s Campaign, something to get excited about.” Even if the contents of the article isn’t favorable to Loki, the header is positive. In an age of news saturation, most people rely on headers, and not content, to base their opinions. Hence, it won’t be a surprise if people just read the header and skip the contents of the article. (We’ll know more about this in the second issue, I suppose).

Vote Loki #1 come as funny critics to the political establishment in the US. It also shows how dangerous a “savior-candidate” can be when he talks only about what people want to hear. Will Loki keep his promises if he wins? Will people be happy knowing that he is lying to their faces?

Notice the next issue’s cover! There’s a Captain America’s comic book with a similar fashion. Captain America is punching Hitler’s face. So, what do you think this cover is trying to tell us?

~GIVEAWAY~ Follow the instructions in the widget below and enter to win the digital copy of Vote Loki #1. Let’s get Loki!

Loki Year 2016: The binding of Fenrir