We have a suspense Tuesday geek girls guide (GGG)! Today we’re going to meet one of our favorite high-functioning sociopaths! Sherlock! However, Sherlocked fans not only love the latest BBC Cumber version of the famous detective, there are far more Sherlokian fannish objects to be amused with. This Tuesday we’re going to take a look at some of them and get amazed! Let’s open your eyes to the wonderful and amazing world of Sherlock!

Sherlock is composed by many versions of Sherlock. However, most Sherlocked fans out there are so because of the Cumberversion from the BBC. Mr. Cumberbatch as Sherlock and Mr. Freeman as Watson are perfect to be shipped, explored and LARPed. So, it is fair to say that there are many different generations within this fandom, since Sherlock Holmes saw the light back in 1887 by the hand of Sir Arthur Conan Doyle.

Sherlockians are fans who love BBC’s Cumberversion of Sherlock. Thus, when you listen to a fan to say that he/she is a Sherlockian, they’re provably stating that they love the Cumberversion! However, many other Sherlock fans who have been so prior to the latest BBC version might also use that word.

This is a very rich fandom to be in. Not only you can start learning a lot about different personality types and start analyzing all people as Sherlock does, you can also get loads of fun by playing Sherlock role games!

Let’s discover this creative and yet sociopathic fandom!

I lost count on how many times I’ve read all the stories of Sherlock Holmes. I started reading them when I was a kid, and I kept on with it till now. Every now and then, I read them again! They’re interesting, fun and you get to imagine a great era! There are many different versions out there, so just take the ones you like the most!

I start with this one, because this is the first Sherlock I saw on TV!! It’s really cool! I highly recommend it!

I was addicted to Sherlock Hound!!! It was so cute! So yes, you got it! I saw Sherlock Holmes and Sherlock Hound at the same time! I recommend this one too! By the way, its author was Hayao Miyazaki!

I know, Downey Jr as Sherlock is madness! Jude Law was Watson.

I know it’s old, but it’s also cool and funny.

Yes, this is the Cumberversion of Sherlock and Freeversion of Watson!

Victorian Undead (2010) is about Sherlock and Watson solving supernatural mysteries. (I wish this was a crossover with Supernatural!)

You can find tons of Sherlock Holmes comic book covers on ComicVine. Some are really old and hard to find. These make great collectibles!

You can play board games like Sherlock Holmes Consulting Detective. There’s a second version in Spanish (I cannot find it in English). It’s really cool! It makes you think a lot, but it’s awesome. One of the assets is that, if you’re around London, you can use the book as a LARPing source.

5. What about some Sherlock fashion?

You can find lots of jewelry, tees and even mugs on Etsy and Hottopic. You have virtually anything about Sherlock and Holmes, especially the Cumberversion. So, if you like that one, you’re lucky!!

Funko pop figurines are too cute! Beware though, if you start collecting them, you won’t be able to stop. From this fall, Sherlock Funkos will be available! (Guess who is getting a Sherlock and a Watson!)

Sherlock quotes come in handy when talking with friends. Some will give them the chills, and others will be too funny! As you watch all Sherlock episodes, keep in mind those quotes that are more of your liking and start using them online and offline. You’ll have loads of fun, my beloved Watsons!

8. Familiarize yourself with ships.

If you think that JohnLock is something new, forget it! JohnLock has been shipped since the beginning of Sherlock Holmes! Ladies would imagine Sherlock and Holmes way back in the 1880s. However, what we’ve been shipping as JohnLock from the end of the 19th Century is different of what we ship at the moment. Not only faces have changed (now we picture Sherlock with a Cumberface and Watson with a Freemanface), but also how they are shipped together. There are tons of fanfiction online, however take in mind that JohnLock has been out there since the 19th Century! Granted that with the internet fanfic slash has boomed, but back in the pre-internet times, the mimeograph made it simpler for shippers to exchange their fics. If you want to know about Sherlock fan fiction, read “Fic: Why Fanfiction Is Taking Over the World.”

[Side note: ships are relationships that fans make with canon (official) couples and fan fiction ones. Not all ships are slash or yaoi (homosexual relationships), some are het (heterosexual ones). You might like or not slash. Some fans are shippers, really dedicated to these relationships. Some really like some ships, and despise others. The best way to proceed here is with an open mind and being kind with everyone.]

9. Start following and taking part in fan pages (and groups if you want) in Facebook, Twitter and Tumblr; or join forums.

Take your time here, because there are tons of them!

You can decide to create your own Cosplay, or buy your set. If you have some extra cash, you can get a real reproduction of Sherlock’s coat. It’s really expensive, but it’s awesome!

The cool thing about cosplaying Sherlock characters is that clothing is easy to find. At least, you can find most of what you need easily. So, why not give it a try!?

If you like writing or drawing, you could decide to write Sherlock fan fiction or draw the entire Universe. It is a great motivation to get better in writing and drawing. You can choose slash, but you don’t need to. Simply write the stories that you feel more comfortable with. Draws can be cute as well. Just do what you want!

It’s a tiny museum, but if you’re a fan: it’s worth it! The Sherlock Holmes Museum in London has everything you’ve dreamt of if you’ve been following Sherlock since you read the first case! I had so much fun there (yes, that’s me having fun with Sherlock’s pipe)!

So, if you have the opportunity to go to London, just go there. It’s fun and you can get an idea of how Sir Arthur Conan Doyle lived and imagined his beloved character.

And above all: have loads of fun!

Sherlock is a great fandom to be in. You can read books, watch movies, TV shows, ship JohnLock, have fun with Moriarty, visit the museum and LARP your beloved characters! You can enjoy not only great stories, but you can also meet incredibly good friends!

A fictional character that changed my life: Loki of Asgard 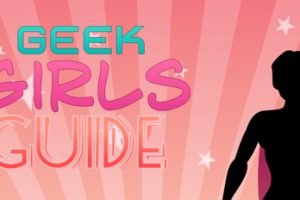 Tuesday Geek Girls Guide: Once a Pirate, Always a Pirate