My Vulcan is like Mr.Spock when he gets presents. You never know when he liked the thing or not. He just acknowledges the present. But there is no change on his face whatsoever. For years I’ve been a half-breed mixture of “parrot” and metallic “cylon“, both repeating ad nauseam “did you like it honey?”, and scanning his movements till I was collapsed on the floor exhausted. For years I’ve been interpreting this as me not giving to my Vulcan the correct present. Which, now I know, was plainly wrong. He was getting geekier and geekier presents, which were acknowledged. It turns out, he loved all of them. He just simply doesn’t know how to show to you how happy he is with all the geekery you are giving him as presents. (I am lucky: he is as geeky as I am, therefore, I don’t really need to think too much. I just go online and search for the geekiest goodies around).

So, what to do when your kriptonite just acknowledges something you did or gave him? I found out how to know if he liked the things or not. Instead of scanning him like a mad cylon during hours after giving him the present, or asking a zillion times if he liked it, I just observe, during the next days, what he does with the object I gave him. I give you an example: I now know he loves geek t-shirts. Every time I give him one, he acknowledges. The next day he will be wearing the t-shirt. Another year I gave him a USB Darth Vader that moves the head (spooky toy, btw), that he acknowledged. Darthy started to be used as USB from the very best moment he was taken out from the box.

As a neurotypical I expect a reaction in someone’s face, apart from acknowledging how much the person liked the present. This “emotions” (metadata that Vulcans cannot grasp), is what tell us, neurotypicals, if we had success or not. When these metadata are missing, we freak out and start acting in a weird way: asking a zillion times the same thing, collapsing our Vulcan; and trying to figure out a better present the next time because we interpreted his reaction as a total failure.

Other “emotions” might be trickier. I’ve discovered that the equivalent of my “sadness” is “collapse” in Vulcans. At least the ones I know. To give you a picture: I live with my Vulcan. His mother is also a Vulcan (she has HFA), a friend of ours is also a Vulcan. These three people react in the same way when exposed to certain situations. For example: when collapsed.

When I am collapsed with negative emotions, I cry. I feel sad, and therefore, I cry. Plain and simple. However, when they collapse, they sleep!! Once we were at a friends house: two neurotypicals and two Vulcans. Do you know what happened? After an hour and a half of emotional conversation, the two Vulcans started to sleep on their chairs!!! We were astonished! At that time I didn’t know what was going on… And the neurotypicals thought “damn! We are so boring!!” But after analyzing carefully the situation (which has repeated itself with the three Vulcans I know), I arrived to the following conclusion: we collapsed them with tons of metadata they cannot translate!

Neurotypicals get collapsed by emotions. When those emotions are negative or dragging we usually (but not always) collapse in the shape of “crying”, “feeling miserable”, and “being depressed”. Vulcans, on their part, collapse because they cannot understand metadata (feelings). So, when in contact with a highly emotional situation they collapse by “sleeping”. They get sleepy, and at a certain point they cannot help but sleep. The problem is: they don’t show up much info on their faces, they start sleeping almost right away. For humans, this means that “hey you are boring”, but in fact, for them, it only means that they’ve been trying so hard to understand a bunch of feelings (metadata), that they cannot really process in their brains, and this hulkish effort has drained all their strength away. The system shuts down (sleeping) to have energy, so that they can “function” normal again after the nap.

The tip here is to help your Vulcan realize when he is nearing the red zone of collapse. Vulcans usually cannot detect, or it is hard for them to detect, the signs of their bodies that pint point to “energy failure” (this is just: being very tired). If you go to a party with friends, observe your Vulcan. Even if his face does not have changes, his body will. If he was standing up and starts sitting down, or looks from one person to another trying to absorb as many data as he can, odds are that a certain point he’ll start sleeping. Before that happens, help him recharge batteries. How? Go near him and suggest looking out of a window, or having a small walk outside.

There are more emotions that we use on a daily basis, that they don’t understand. There are lots of signs that they do that we don’t usually see. Observing our Vulcan will help us heaps. Not only you will understand his ways, but you will also live happier. 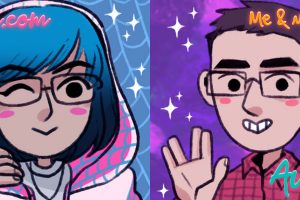